The goal was and is: to describe the signals horses give to incentives in their environment. This incentives can be other horses, other animals, humans, sounds, objects, etc. It may also be that a horse is studied in an environment that does not seem to have any incentives.

To avoid wishful thinking film material forms the basic of the study. I myself, or together with Ristin Olthof have made various films. Other persons have also send in films. I have studied these films in detail. I have noted body movements form the horse or other animals that were present in the film. I have noted the posture of the head and neck, ears and tail. And the shape of the eyes and mouth. The horses that are filmed live a domesticated live in a by humans controlled environment. This might give a different ethogram of signals then the ethogram of semi wild horses.

At this point in time I have analysed 220 films. In the last years I have watched over hundreds of hours of films of horses. I have also observed horses when not filming. This has lead to the analysing of various signs that can also have a communicative meaning. This study enabled me to recognise signals and group them on communication ladders. These communication ladders show how horses react and interact with incentives in their living environment, when they do not experience tension, have increasing maintaining or decreasing tension. The communication ladders, including the signals and bodily features, enables you to recognise the behaviour of the horse and for some degree make it predictable.

The study has lead to a book contract and the publication of it in the summer of 2017. In this book I have included the language signals I have noted over 35 times on different occasions. This to avoid over generalisation of a single sign. The book will have 176 pages and approximately 275 pictures. You can read more about it on the home page.
The study on calming signals of horses and other language signals will continue. I will keep on filming and analysing films to register in my study.

If you want to join and sent in films you can click on the picture below. You will be directed to the personal We Tran page. Your help in sending in films is highly appreciated. 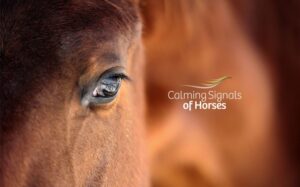